You are currently browsing the archive for the Competition 2006 category.

From the Ministry of Culture and Mass Communications of the Russian Federation to the participants of the 5th International Russian Rotary Children Music Competition.

A unique chance for young virtuosos

The Finals of the greatest European music competition for children aged 8 to 12 years will be held in Moscow, in the concert hall of the Central Music School of the State Tchaikovsky Conservatory ( Malyi Kislovski per. 4, str.5) March 28, starting at 18.00.

The best European music schools and Rotary Clubs from 9 countries and more then 50 cities, from Vladivostok in the east to Hagen (Germany) in the west, from Stord (Norway) in the north to Erevan (Armenia) in the south, have nominated 68 talented children playing violin, violoncello, piano and wind instruments, for this prestigious international music competition.

Only the best 18 children made it to the Semifinals, which will be held in Moscow March 26 and only 7 of the semifinalists will reach the Finals on March 28.

This music competition is supported by many Ambassadors in Moscow. Leading Russian and foreign companies and individuals as well as famous Russian musicians Vladimir Spivakov, Jurij Bashmet and Natalia Gutman, who was the Chairman of the 3rd music competition, which took place last year in the Residence of the Ambassador of France in Moscow.

Since the first competition, the Rotary Club Moscow International is the official organizer of this yearly music competition.

This competition is member of the European Union of Music Competitions for Youth, which underline the very high status of the competition. Many children winning the competition or participating in the Finals became well known to the public. Winner of the 2. competition in 2003, Anna Denisova, plaid a year later in Holland at concert attended by President Putin and the Prime Minister of Netherlands. Elena Ilinskaya, 3rd place in 2003, was playing for living in the Moscow metro and underground passages, before receiving long term scholarship from RC Moscow International. About her destiny before and after receiving the scholarship the Russian television made a film shown in the program called “Faith, Hope and Love”
Most children and finalists from previous competitions were children from poor or needy families, which is not surprising. You must not only have great talent but to work very hard to arrive at the finals of this most prestigious music competition in this age category in Europe.

The next 5th International Russian Rotary Children Music Competition will start from September 1, 2006. From that date the organizing committee start to accept videotapes or DVD of the 5th competition - last date of acceptance of tapes or DVD will be December 31, 2006. 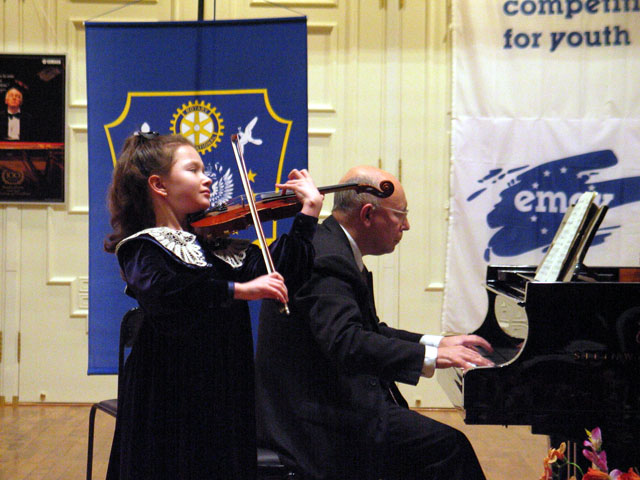